In 1986 the first TV series to film in Southport was Lovejoy. Starring were Ian McShane, Dudley Sutton and Chris Jury.

In 1989, the feature film, Weekend at Bernies was filmed mostly on Bald Head Island and it featured the lighthouse, Old Baldy. The Movie starred Andrew McCarthy, Johnathan Silverman, Terry Kiser and Catherine Mary Stewart. Bald head Island is reachable only by water and the most popular transportation to the island is the Bald Head Island Ferry (http://southport.insiderinfo.us/getting-here-getting-around/boat-ferry-travel/ferries/bald-head-island-ferry/profile/)

In the ten year period between 1986 and 1996 a series of made for television movies were filmed at least partly in Southport. In addition, some television series were filmed here as well. 1996 was the most productive year and included the following TV movies:

In 1992 Southport saw some of the filming of the television movie, Spies. Stars included David Dukes, Shiloh Strong and Gail Strickland.

Nicolas Cage was here in 1993 along with Samuel L. Jackson and Michael Lerner starring in Amos & Andrew.

A comedy/romance, The Inkwell, was shot here in 1994 and starred Larenz Tate, Joe Morton and Suzzanne Douglas.

The Matlock series with our own Andy Griffith ran from 1986 until 1995 and was filmed mostly in Southport. Andy was joined by Linda Purl and Kene Holliday.

The TV series, Sweet Justice, was filmed in 1994 and starred Melissa Gilbert, Cicely Tyson and Ronny Cox. Also in 1994, The Birds II: Land’s End was filmed almost entirely in Southport. The name of the Southport-Fort Fisher Ferry was temporarily changed to: The Gull Island Ferry.

There were fake birds all over the roofs of buildings, most of them located in the Old Yacht Basin. Some of the restaurants and shops were closed for the duration of the filming. One restaurant, in particular, that I remember is the popular, Yacht Basin Provision Company. (http://southport.insiderinfo.us/restaurant/southport/yacht-basin-provision-company/profile/) 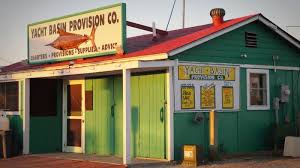